We're looking forward to the next book in "The Saga of the Black Wolf". Do you know when it is due to be released?

I wish I did. I’m still working on that with my editor. I’m hoping (fingers crossed) for spring of 2013, but we all live under Murphy’s Law: if things can go wrong, they will. At the worst possible moment.

If you met an alien from another planet and were asked to recommend one or two books to him/her/it that would summarize humanity, which books would you choose?

I’d rather recommend not just one or two books, but an author. Stephen King. To me, he’s a genius and, for the most part, an excellent writer. But most of all, he really can see into not just the darker aspects of human beings, but also what is great and good in all of us. So many of his characters have the noble spirits of true heroes that can speak to the heroes many of us wish we could be.

Do you have any superstitions associated with your writing?

No, and that’s rather interesting, as I’m a very superstitious person. I see omens everywhere.

Do you have a favorite quote or passage from In a Wolf's Eyes that you'd like to share with us?

Yeah, I think I do. In Chapter 9, “Of Legends and Blood Brothers”, Rygel tries to get Raine to admit he’s gai-tan, the werewolf. Not a killer from tales, but a man born with the soul of a wolf and can change forms at will. Raine hears the legend and it bothers him, as it stirs something from deep within that he can’t ignore. He shuts Rygel down, who then decides the pair should become ehlu’braud, blood brothers. After the ceremony:

“Now we drink.” He pushed a cup toward me and lifted his own with a faint grin.

I raised it, returning his smile. “A toast?”

We clinked cups and drank deep.

“Turn yourself into a wolf.”

Sorry, you got to read the book to get the full effect.

Which deceased author would you most like to take out to dinner?

Robert Jordan. I would love to quiz him about how he juggled so many characters, places, events, plots and subplots in his “Wheel of Time” series all without dropping a one. How did he take notes? How did he track who was doing what and when and why? And of course, pick his brain about the world he created. I’ve been a fan waiting for each successive book to come out and I’m in the middle of number 13 right now.

What is the best contemporary novel you've read in the last year?

I don’t allow myself much luxury time to read these days. I work 5 to 6 days a week on the job that pays my bills, care for my horses and write most every evening, I allow Saturday nights for a movie. I did read Stephen King’s “Under the Dome” but it wasn’t necessarily his finest work. I can’t even say the Robert Jordan book I’m reading now, “Towers at Midnight” is the best. Even another favorite, Tami Hoag, let me down when I read her latest. Can I perhaps just say that one of the hottest writers right now caught my attention? Stephanie Collins with her “Hunger Games”. It’s a good book and I couldn’t put it down. Maybe because her heroine and mine could be sisters.

What advice would you give to aspiring writers?

Write as often as possible. Life tends to interfere with our writing: bad day at work, fight with spouse, children need to be grounded, making ends meet, wanting to be a writer more than anything, but even if you drag out your work for a short while every day, do it. Reread what you wrote, edit, write a few lines of the next paragraph, the next scene, notes on what to do next…write. Practice makes perfect and the more you practice the better off you’ll be. Give yourself some time off, but remember that even a few lines a day will bring that work to publication faster.

Do you base characters on real people you have known?

No, I’m afraid not. All my characters are based on the crazy muse in my head. I can’t compare them to anyone I’ve ever known

Do you find it difficult to sit down and write for weeks, months, or years on the same book?

Not at all. Being a photographer full time for the past eleven years, making time to care for and work my horses (which I care for every day but don’t work often enough), I went years without writing at all. Then I set a goal for myself over four years ago, began writing again, and finally finished “In a Wolf’s Eyes” . Immediately I began production of book two as I sought for and finally found Untreed Reads Publishing to accept me. I’m looking forward very much to working on the rest of the series.

If you could be any character in fiction, who would you be?

Thank you for your time spent in participating in this interview! When you're finished, please save this file and email it back to submissions@ebookmall.com.

Your Horse Is A Book 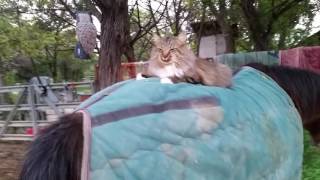 Your Horse Is A Book

From Angel to Tigress

Another "Catch a Wolf" Deleted Scene